Fungus between the toes: causes, symptoms and treatment

Unbearable itching and redness between the toes, sharp pains when walking are the first signs of the most common dermatological problem - fungal skin lesions. The mycelium of the fungus, which sprouts from the delicate epithelium of the skin, gradually "spreads" to the entire plantar surface of the feet, causing unpleasant moisture and broken parts, painful cracks and deformation of the nails. 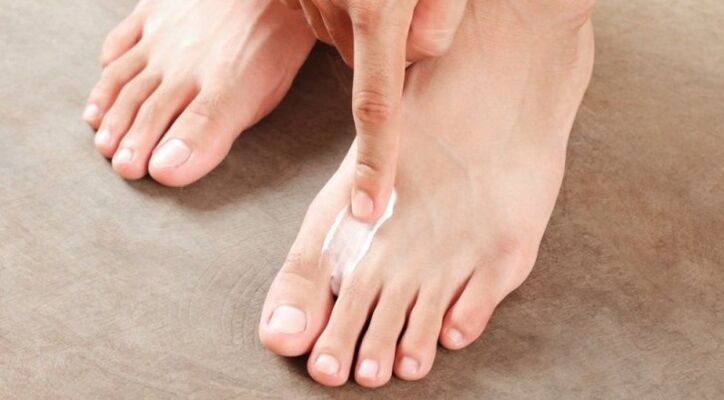 The causative agent of the disease are dermatomycetes, the most common of which is the genus Trichophyton. They live almost everywhere - in pools and beaches, in people's shoes and animal hair, but the disease is not always provoked. Creating an infection gate through which the dermatomycete can penetrate to a sufficient depth is an important factor.

Fungus between the toes appears when the barrier functions of the skin are weakened:

Fungus between the toes: symptoms and complications

How the fungus looks on the feet between the toes can not be described unequivocally, because the disease has several forms, each of which is characterized by specific manifestations:

In the arsenal of modern medicine, there are a number of drugs for the treatment of fungus between the toes. Among them are both local ointments and tablets that destroy the fungus from the inside. As a rule, a specialist selects a drug by analyzing the degree, form and scope of the disease. Systemic therapy using pills is used only in advanced cases, when the entire skin of the foot is involved in the process and there are characteristic changes in the nail plates.

Antifungal ointments have been divided into several generations. However, it should be understood that even the most effective remedy for fungus between the toes does not guarantee that it will be discarded if you neglect the rules of personal hygiene and a number of measures.

A gentle pedicure should be done at least once a week during treatment. Subsequently, the frequency can be reduced to once every two weeks.

Since fungi can live in socks and shoes, they also need treatment. To do this, use chlorine-containing liquids as bleach.

If you are thinking about how to get rid of the fungus between your toes, do not forget to change your socks every day. Wearing clothes for two or three days in a row retains the traces of sweat that parasites already live and multiply.

The combination of a course of therapy chosen by only one specialist and careful adherence to all hygiene rules can ensure a quick recovery from the disease.

Treatment of fungus between the toes with folk remedies

Traditional medicine has collected many recipes to combat the fungus, including products from kitchen cabinets, as well as many exotic herbs and medicines. The most accessible of them are:

If you have gone through a lot of means and are thinking about how to treat the fungus between your toes, you should also try the effect of vinegar. Despite the fungi living in a slightly acidic environment, it does not tolerate an increase in pH. Lubrication of the affected areas with a solution of 9% vinegar and water in a ratio of 1: 8 gives positive results in 2-3 weeks.

The most popular remedies in folk medicine - onions and garlic also have an antifungal effect. Corn made from them is mixed with petroleum jelly in a ratio of 1: 1 and applied to the affected skin before bedtime.

If you have not decided how to treat the fungus between the toes, do not forget about the destruction of shoes and personal hygiene items. This guarantees that there will be no relapses in the near future.